There are moments in the Nature so quiet and peaceful that I’m reflexively holding my breath afraid that the mere whisper of breathing will destroy the magic of the place.

I love nature, I love wilderness not only for what it is but also for an opportunity to run away from the noise, chaos and often purposelessness of our civilization.

That’s why I so much like to go to Olympic National Park in winter. The weather is less than inviting most of the time that keeps most tourists out and I often have places crowded in summer to myself. They become something else allowing truly appreciate their beauty.

When I find such a place where I experience a sense of harmony with my surroundings I put  camera aside and just enjoy those moments of quiet and peace; following leisurely moving waves on a lake or slow floating clouds in the sky. And I feel like I belong here. 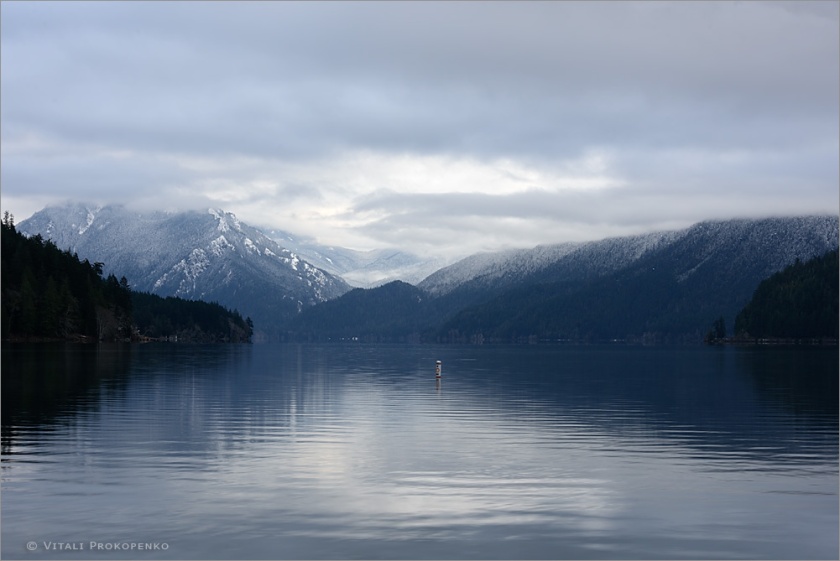 While Sun for me is something strong and powerful, Moon is soothing and quite. It is on the other side of the world. Dreamy and sleepy. What can be better than sit at night covered with a cozy blanket looking at shimmering surreal world in a moonlight.

I’ve passed by Lake Crescent many many times. It is a large lake and one of the important features of Olympic National Park with its deep incredibly clean water. Over the years I’ve stopped at different places around it and taken several photos,  but have not got any really interesting ones.

Eventually I gave up and was just passing it by on my way to the beaches of the Pacific coast. But as you know persistence pays off. So, this summer I was driving from the beaches back home and as usual my way back was around the lake. This time was different…

I saw this beautiful scene. Finally the lake opened up its soul to me. It was calm and serene. Mist was hanging over the lake hiding the west bank. Mountain ridges were coming down to the lake becoming softer and softer in the distance with shades of pastel blue. The water was like a glass perfectly reflecting the mountains and the pastel pink sky. Two trees were standing aside on the right bank. And one small next to them. Like a family that came out to the lake to have fun by its side.