I have many photography. I like to dive into someone’s imagery and photo books is the most affordable way to do it. But looking at photo books is not where I get my inspiration from. What gets me inspired is paintings. I can spend endless hours studying one painting, how the light is captured, how the color is captured, how the feel of the scene is captured, the emotions in the brushstrokes. When I photograph I’m trying to achieve the same perfect light as in landscape paintings and I want to get my photographs to the same level of essence and feeling of color as impressionists’ paintings had. 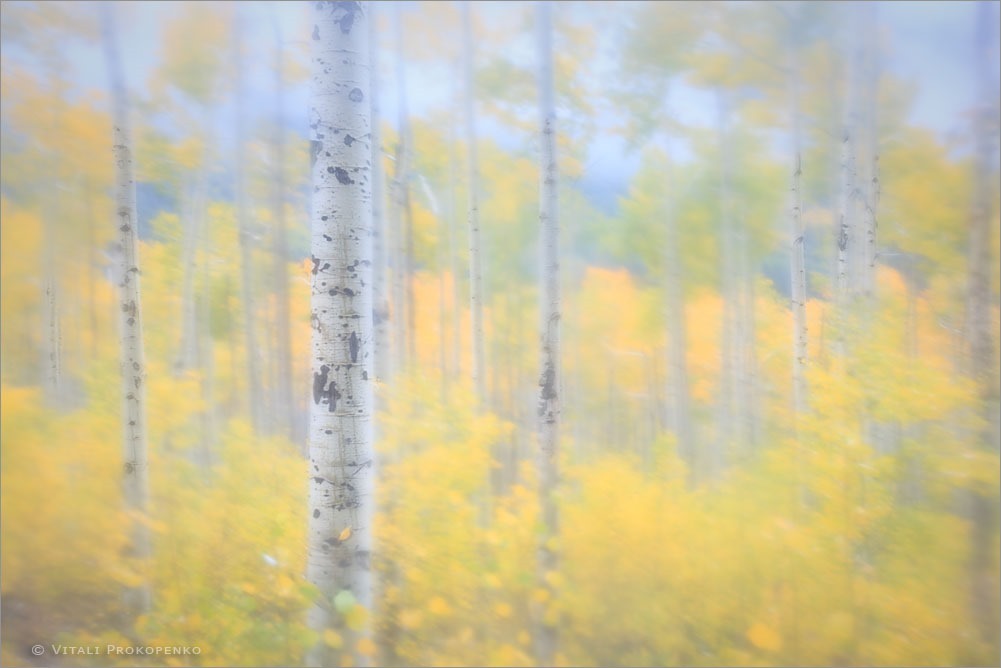 I’ve finally completed editing photos from my trip to Colorado. Despite my misadventures that I’ve already described I’ve brought quite a few photos of intimate places I really liked. There are a few themes I can see thru the photos. One of the themes are reflections. Here a few photos with reflections. Enjoy! 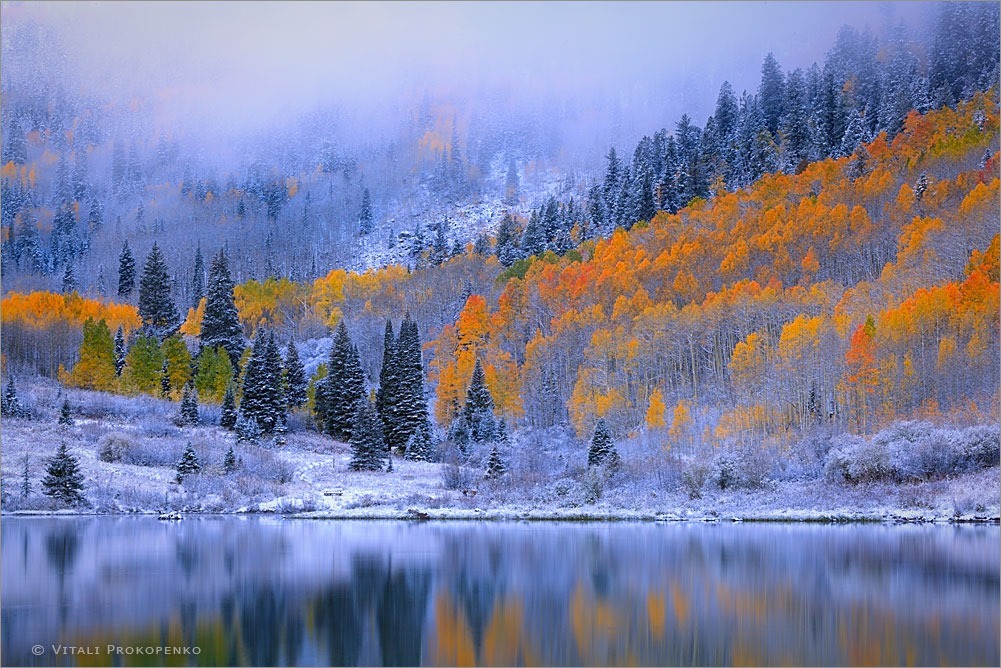 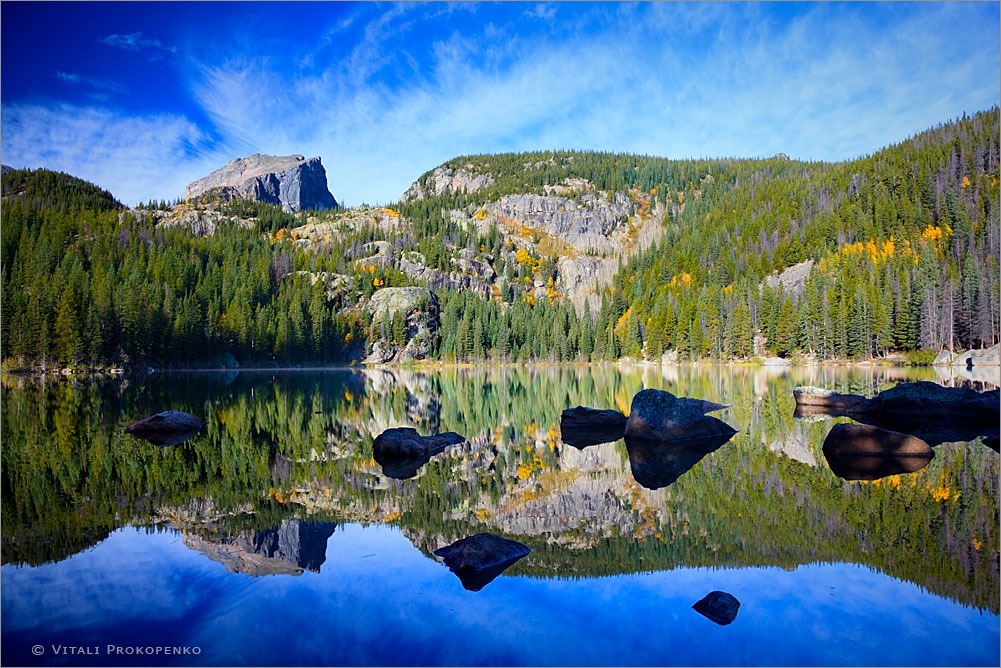 (This is the last story in 3 story series on photographing popular destinations. This one is the happy one.)

In my travels around Colorado this fall I visited many different places. It was my first trip to Colorado and my first fall trip to Colorado and thus I spend most of the time exploring. In a few days after my arrival a sudden and unexpected snowstorm ran thru the mountains, taking off most of foliage and dusting them with snow.

On the fourth day I drove south in a search for fall foliage. That’s how I ended up staying overnight in Montrose. I arrive late at night. It was already too dark to see anything around. At a hotel I saw a tourist guide mentioning Black Canyon National Park. I was not even aware of it. I thought that since I was so close to it I might as well visit it. The brochure did not have impressive photos of it. I searched online and did not see anything impressive either. One thing for sure was that there was no fall foliage there. Thus I abandoned that idea.

In the morning I could see my surroundings. Everything was green. No fall foliage in Montrose yet. I decided east and then north to Crested Butte. Just a few miles out of Montrose travelling east I saw a sign turn to Black Canyon National Park with only a few miles to the entrance. I thought it was a sign that I should go.

I did not regret I went there. I did not find fall foliage their or amazing well-recognized photo opportunities but I found something way more important. Solitude being one-on-one with the Nature. I was almost the only visitor there. I was sitting on rocks by an edge of the canyon listening to quite singing of birds, facing warm sun and cool breeze. I would look at the deep walls of the canyon dropping down with edges lit up by the Sun. Or I would close my eyes and let the other sense sharpen and form their own world. It was so relaxing and peaceful. That reminded me what photography was too me, filled my mind and soul with creativity again. 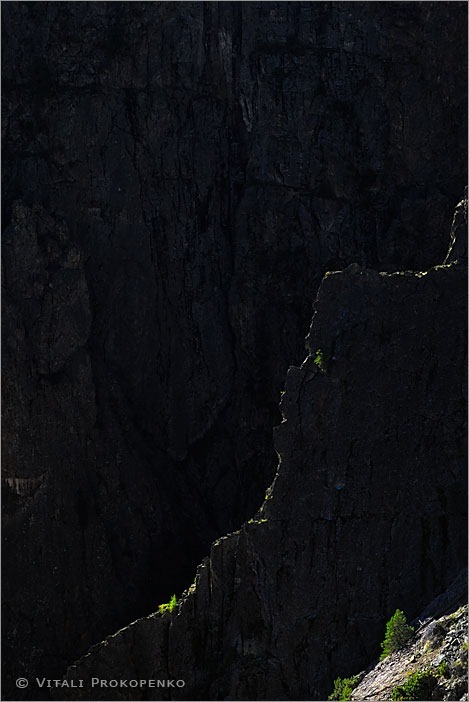 (A series of three stories – frustrating, scary and happy – with a common thread.)

At the dawn of photography back in 19th century there was this guy by the name Oliver Wendell Holmes, Sr who was a big advocate for photography in general and travel photography in particular. He talked about taking a photograph as taking a “skin” of reality that was based on his interpretation of an old Greek myth. I don’t want to go too far into that direction as it is not the point of my blog post. The interesting part is that he also warned of possibility of overskinning some scenes. He was concerned that some scenes might be photographed to the point when the scenes themselves will be not interesting. I came face to face with that on my trip to Colorado this fall.

Pacific Northwest has very limited opportunities for fall colors. You’d need to scramble for interesting fall color compositions outside cities in evergreen forests. Going to Colorado and diving into fall colors was a long waiting dream of mine. This year I finally went there. It turned to be a lot of what I expected, a lot more than I expected and some that I’d rather not have. This three stories with a common theme of what photography is for me and what it is not.

Since it was my first time in Colorado I did not have any places of my own in mind; I mostly traveled to well-known places. One of such places is Maroon Bells Lake. It is considered an iconic place of Colorado. Another photographer who went there last year warned me to come an hour before sunrise as there are quite a few photographers coming there to photograph sunrise there.

I scouted the place I want to photograph a day before and showed up there about an hour before sunrise. There were about 20 more photographers along the lake. The place I had scouted the day before was not occupied. I set up my camera on tripod and started waiting. It was freezing cold but everyone was jolly with anticipation. Over the hour that followed number of photographers slowly grew to 70 but everyone was polite and asked if they’re in the way when they setup camera.

Everything was well right up to sunrise, crowded but well. Right before sunrise a guy showed up and put his tripod right in front of my camera. When I politely noted that I was photographing there and he was blocking part of my frame, he said that everyone else was photographing too and would not move. I was pissed but not sure what to do about it except to frame a different image. There was still no way to completely avoid him, so I removed him from a corner of my image in Photoshop.

Next morning I went there without much enthusiasm but with a hope to still take the image I wanted. When I arrived there were already about 50 photographers. The spot where I wanted to make a photo was taken. I got what I got. By the sunrise there were more than a hundred photographers. It was crowded and did not feel very friendly. A guy on the right was frustrated with his gear which he had too much of; switching it constantly in indecision what to use; getting tangled up in it. I was locked into taking one and only one composition. Anything else would mean getting a bunch of tripods in my frame or getting myself into someone else’s frame. Can I be creative in such environment? No.

I love fall most of all. When I was a teenager my favorite time of a year was spring when everyone springs into action, when air is filled with scents of blossom and fresh greenery. Now fall is my favorite. Is it because of age? Or simply the fact that I live in an evergreen state now?

Fall is the busiest time of a year for me. I like spending hours meditating with my camera in a solitude of the Nature. I love diving into its colors. This year I’ve already spent time photographing fall in Colorado, and in Rainier National Park. This week I’m going to yet another location. Naturally, I cannot keep up with processing all the photos. Well, I’ll have the whole winter for that. But I feel like I have to keep up with writing blog. I promised that to myself. So, here is one image from Colorado.