I’m increasingly photographing with more and more challenging lighting. Such as including sun high in the sky into the picture. The creates a lot of glare in the photo. And I’m working thru those issues, finding how to avoid them or incorporate them in my pictures.

There is a couple methods I use to avoid glare in my pictures. First one that I used for a while already is to block out the Sun with a finger, take photos without the Sun and the glare. The next photo is with no fingers in the frame. Both photos should be taken with the same exposure, the same focus point, the same aperture and on tripod. I would take the normal photo as a base and then use the one where I blocked out the Sun to patch any areas with a glare. This methods works really well during sunset or sunrise when the Sun is placed closer to an edge of a frame.

The other method I discovered during my trip a week ago to the Palouse. Turns out that if I open aperture to its widest setting I get almost no glare or at least its impact becomes imperceptible. This method works well even if the Sun is in the middle of the frame. That’s the technique I used for the photo below that I took during the trip.

Again I would use the photo with aperture set to where I want it. In this case I wanted to close down aperture to get sun burst rays. Closing down the aperture produced a lot of glare in the sky, on the Steptoe Butte and in the fields, that would be hard to patch in Photoshop if I did not take another photo with open aperture and used parts of that photo to patch out all the glare.

Then I discovered that polarizer that I had on my lens had imperfection that resulted in light spilling further from the Sun in two directions along one line. (And just in case you did not know any additional glass surface adds more glare to the photo as sun light bounces back and forth between glass surfaces.) My first reaction was to remove the filter. But then I thought of incorporating that effect and make that line horizontal by rotating the filter. Later I also did take photos without the filter but I like the one with imperfection more. It gives some surreal feel to the scene. 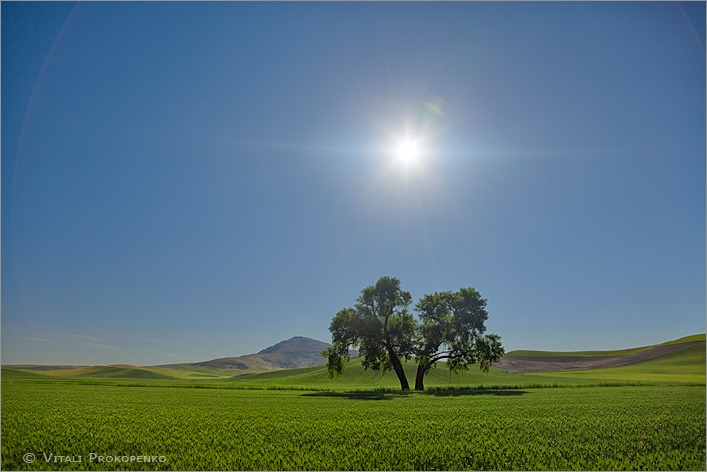 One thought on “Taking Advantage of Imperfections”