Snow in the Palouse, cold, windy… I went there again to see it, to photograph it, to experience it. And I was blown away by the beauty of it again.

I arrived there at night on the longest night in the northern hemisphere. Most of the drive was in the dark and most of it was snowless. But the temperature drop was noticeably. As I was driving I was watching outside temperature on my car dashboard. I wanted to know when it drops below freezing to drive slower in case there are ice patches on the road. As I got to the crossing over Columbia river I was watching in awe how temperature was dropping down another degree every 10-20 seconds. It was unbelievable: how temperature could go from +4 to –7C in a span of just a few kilometers.

As I was getting closer to Colfax the snow started showing up. It was getting thicker and thicker. It felt like the Palouse was the only place that had snow, isolated island of snow surrounded by bare land. And it was all in deep fog. It was beautiful. I just had to stop and photograph.

I stopped at the entrance to one of the side roads that was covered with too much snow, not drivable. I went to photograph a small farm by the road. I stayed close to the main road as snow was too deep to wonder off. I was taking picture after picture with long exposure. A snow plow truck passed by cleaning snow from the road. Smashing me with the powerful spray of wet snow and dirt. I was not angry, I was strangely calm, nothing could disturb me soaking up the beauty around me. And after all I saw his tracks – he tried to drive the truck farther away from me but splashing me was unavoidable.

I spent several more hours just driving around looking at all of it, enjoying all of it. Finally, past midnight I stopped, climbed into the back of my car and fell asleep, tired and happy. 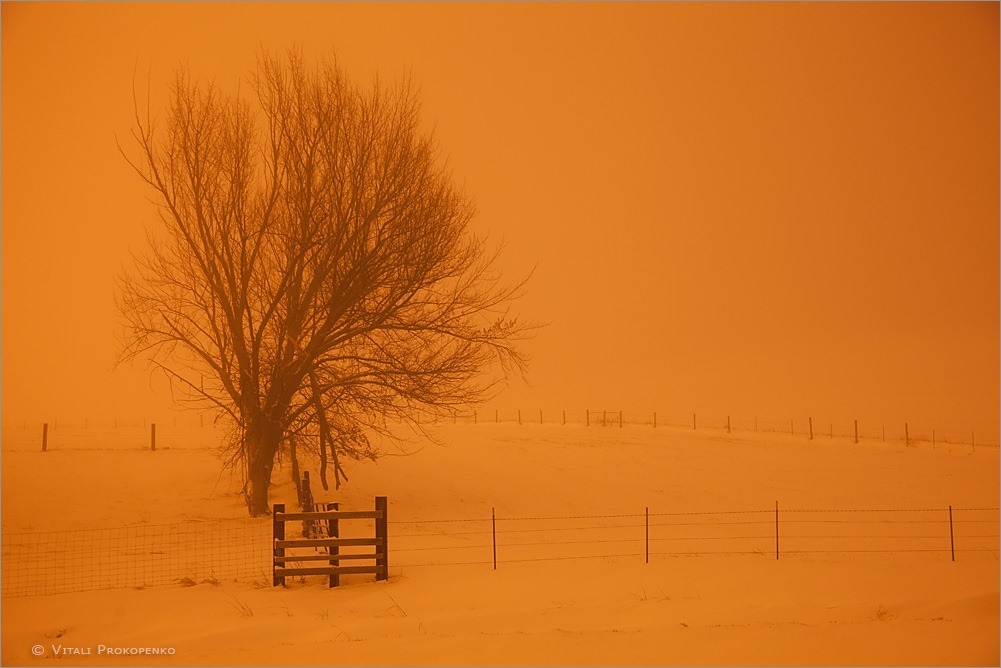