Today I went into dunes for sunset. There was little to no wind at first then within a few minutes wind became very strong. It was not only moving dust, it was moving sand.

Would you want your skin be polished with sand paper? That’s how it felt standing in that sand storm. I had to hide behind a bush hoping that it will be over soon but it was picking up more and more. As I was standing behind the bush I saw sand settling on camera. I needed to get out.

I was walking backwards toward a road to keep my back against the wind. The fun part in walking backwards was seeing my footsteps disappear right in front of my eyes. The wind and moving send would repair the dune texture within seconds. 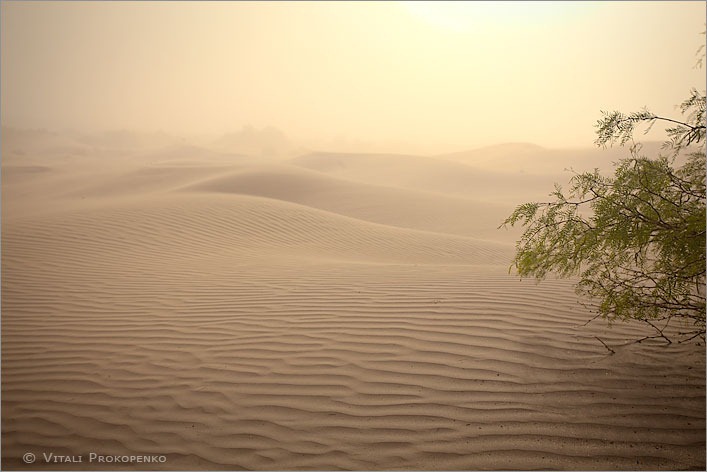 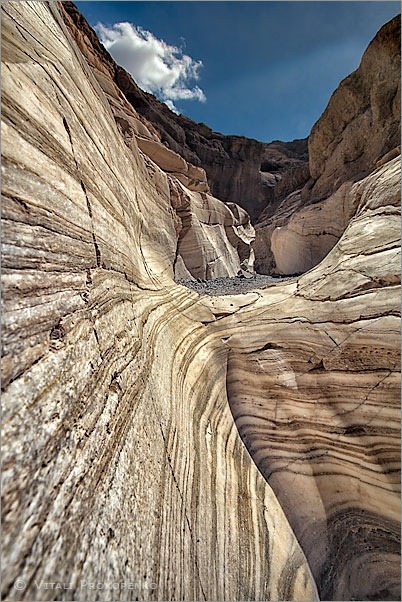 Today at noon I hiked up Mosaic Canyon. It turned to be more interesting from geological and mineralogical point of view rather than from photographical. The variety of color and texture of rocks was captivating.

On the way back I saw what looked like a steep trail up to a ridge that could open up to a view of Death Valley and Mesquite Dunes. I started climbing up.

The trail was getting steeper and steeper. At some point I had to climb up a two meter drop. I had to stop to think about how to climb it and realized that I could climb up but I would unlikely be able to climb down. There is a reason why climbers slide down on ropes. Climbing down is much harder than climbing up.

I recalled what John Shaw said when was asked if he had one advice to photographers what it would be. His answer was "Don’t be stupid". Being already 15 meters up on a very steep trail with sharp rocks and nobody else making this far into the canyon, there would be no help if I make wrong move.

I carefully retraced back my steps backward (there was no room to turn around). It took longer to get back down than to walk up. Once I had ground under my foot again, I was happy that common sense won over curiosity this time.