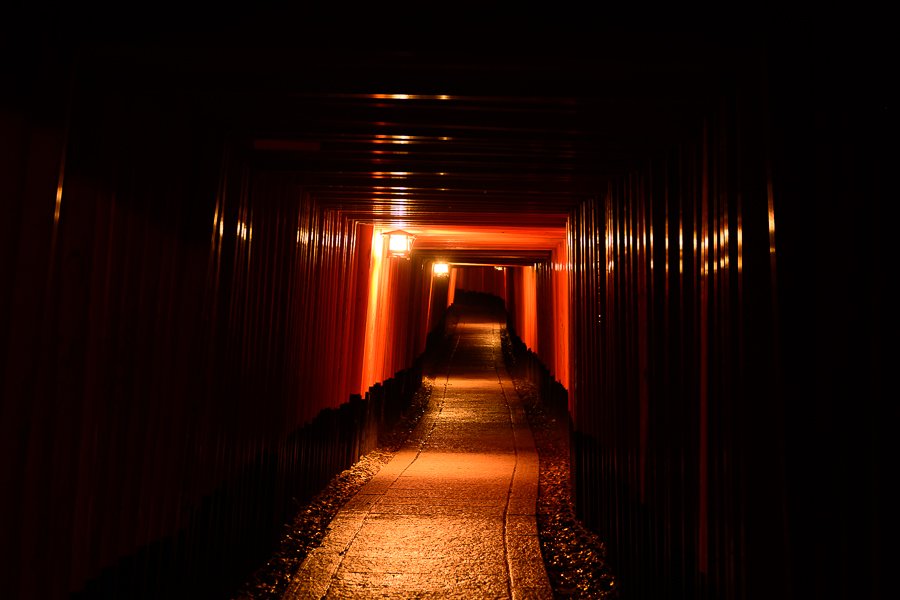 I recently vitsited Kyoto, Japan. Before I left on the trip a friend of mine who had been to Kyoto before me showed me her pictures of Kyoto and said that she would be interested to see what kind of pictures I would take at Fushimi Inari-taisha (https://en.wikipedia.org/wiki/Fushimi_Inari-taisha). I thought of it could be a good challenge for me.

On my first day in Kyoto I went to Fushimi Inari-taisha midday. It was very crowded with tourists. At times the stream of torists moving through seemingly too narrow torii was so thick that I could not stand in one place, I had to move with the stream. It was hard to get any picture of the place. So, I did not. Instead I spent my time exploring the place, experiencing it first hand.

Next day I went there in the very early morning. It was dark and cold. The city was asleep. Occasional taxis on the narrow roads were asleep too with their drivers sleeping in reclined seats. The subway was  closed in such early hours and I walked along the streets of the quiet Kyoto to Fushimi Inari-taisha for an hour. I walked the path that would become all too familiar to me in the mornings after that.

When I got to Fushimi Inari-taisha it was still very early and I had it to myself until the first train would bring early-risers. I took some pictures but they somehow did not capture the place the way I felt it. They were too obvious, lacking uniqueness, my personal experience with it. They were technically perfect but that was too low bar for me. I wanted to go beyond technical.

On the morning of the third day I realized that I kept approaching photographing Fushimi Inari-taisha the same way I approach landscape photography paying attention to details. Every picture had every detail sharp in highlights, mid-tones and shadows. But that was not what Fushimi Inari-taisha was about. It was about mystery. It was about unseen and unheard. It was about my deepest wishes and deepest fears hiding away from light in the dark shadows of night. They were there for me to find, they were there for me to imagine.

Only after abandoning the idea of capturing every little detail in each picture I started getting pictures that spoke to me. A hint of torii, a striking pattern of shadow and light, a light revealing nothing but a few characters of Japanese script was enough. The rest could be filled by one’s own fantasy.

Once I saw the magic of the place I fell in love with it. It became the destination of my nightly pilgrimage.

On the last two days of my stay I finally got to the summit of Mount Inari (I had too many interesting photos to take at the lower levels before). As I got to the shrine at the summit I felt moved, touched by the experience of all those days and prayed following the local customs I had observed for so many times all the previous days. It just felt appropriate, like that was the single purpose of climbing all those steps.

I could not get enough of Fushimi Inari-taisha. On the departure day I stayed there as long as I could taking more and more pictures. Even as I had to leave I saw even more pictures that I did not have time to take. 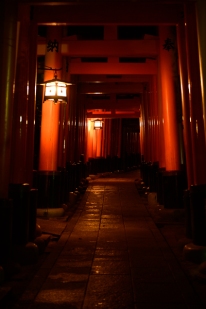 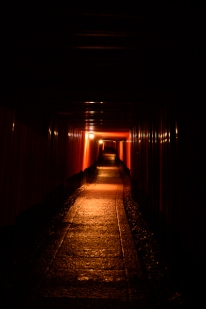 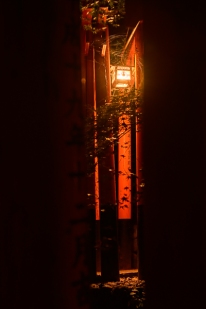 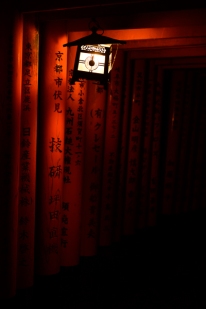 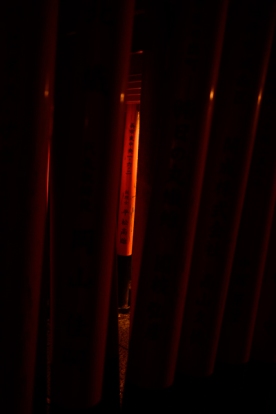 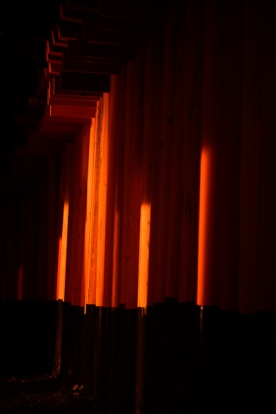 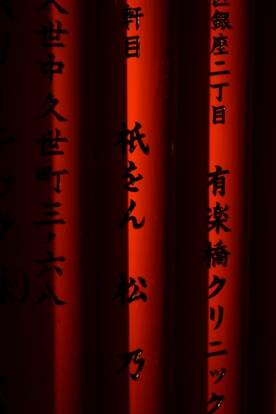 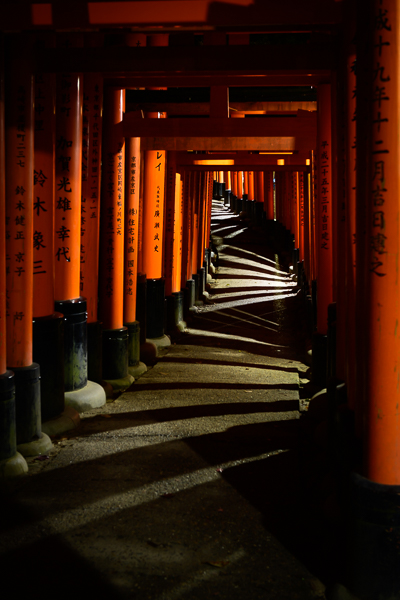 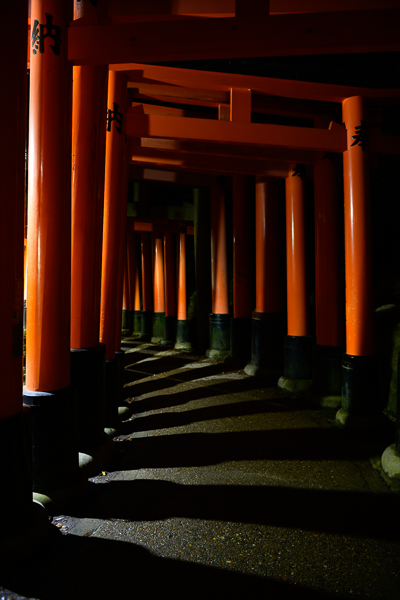 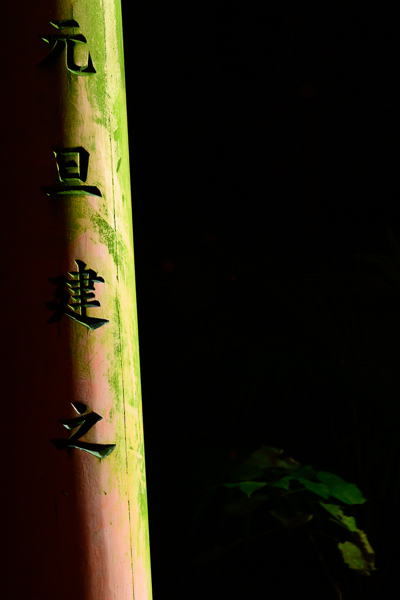 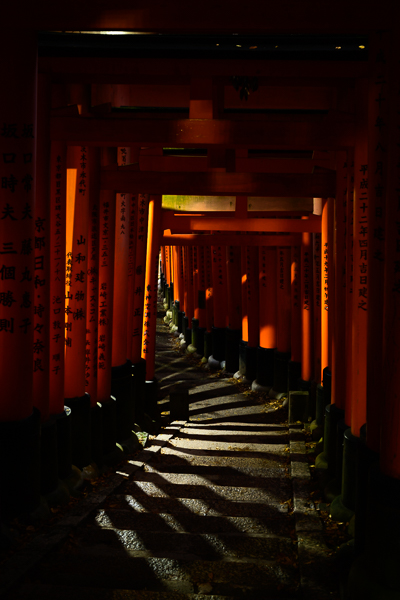 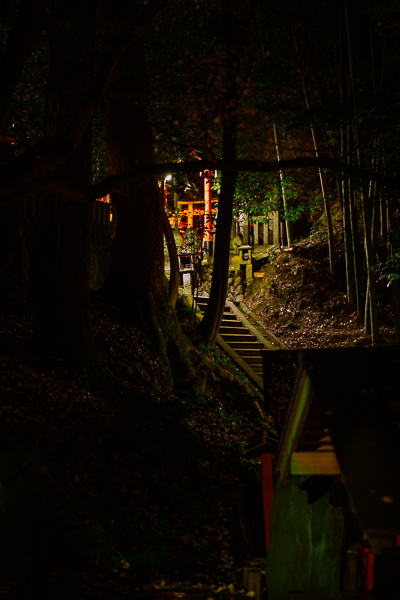